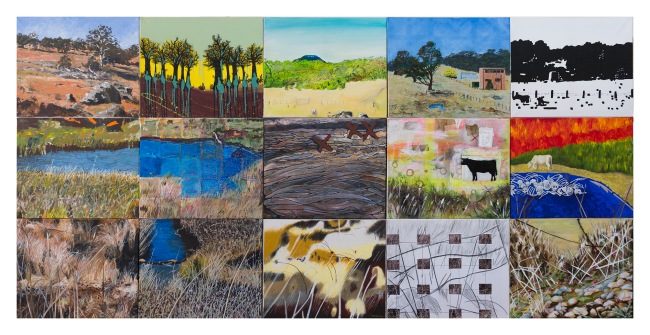 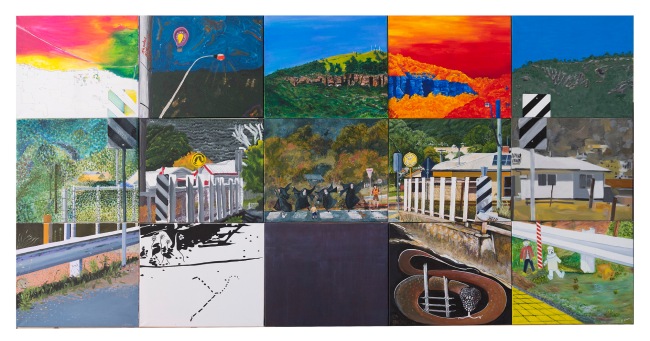 This project occurred to me when I stumbled on the Liverpool Painting Society exhibition at Casula Power House.  I was struck with the idiosyncratic singularity of style that all of the painters displayed.  It was all so strange and unique that I thought it looked like contemporary art.  It occurred to me that while contemporary art strives with great intensity to achieve singularity, singularity was also something that was unavoidable.  No matter how “conventional” a painter’s style, those idiosyncrasies of personal history, training, experience, etc would never combine to produce the same style twice, despite an artists efforts to submit themselves to a tradition. Instead of the supposed unique singularity of “genius” or originality, I wanted to celebrate the ubiquitous singularity of everyone.  The process of making these particular works began with me photographing a landscape in the viscinity of the community of artists I approached.  I then gridded the photograph and gave each artist a cell of the grid and a blank canvas.  I asked the artists to paint the cell according to their practice and asked them not to communicate with each other about the project.  I wanted to express the difference in perceptive style within a depiction of a landscape that was common to them all.  This work was exhibited in an exhibition called Collectivism at Kandos Projects in September 2013.

An installation of found media in Clandulla State Forrest.

(this text originally published on whereistheart.com.au)

This work continues a series of installations I call the rubbish works.  Originally the process involved scouting suburban streets during council pickup days, and selecting a pile of household detritus as it has been placed on the sidewalk.  I treat the pile as an art kit.  Using all of the material provided and nothing but the material provided, I create a composition.  The process involves a deep engagement with the rubbish, the need to question each object as to what it is and what it means, could come to mean and what else it could mean: who did it belong to and what would it feel like to place it in this position relative to some other thing.  Should I create a narrative?  Should I abstract it into a formal element?  Why don’t I just leave it as what it already was?  All of the problems of art present themselves as I struggle to resolve the work into some kind of coherence, which, when it comes, brings with it the rewarding sense that I have redeemed something… if only a little bit and for a little while.

My recent move to Kandos meant that I would no longer have access to council pickup days and I had considered the work stalled.  This changed when a friend showed me an illegal rubbish dump in the middle of The Clandulla State Forest.  The dump had everything I looked for in a potential “art kit” in that it seemed to be crawling with its own implications.  This dump was located 15 minutes from the free Kandos tip and it contained a lot of little girls toys, dolls and clothes as well as domestic objects such as cooking utensils, cleaning materials, old food in bottles, a tent, a patio umbrella, a car radio, some keys, etc.  It was as though someone had dumped their entire domestic existence in an act of rejection that was as symbolic as it was real.  The predominance of children’s possessions made you feel that you were looking at a murder site, scattered with the slow decay of innocence.  The matted fur of toy rabbits, the stained children’s underclothes, the limbs of barbie dolls contorted and discarded in the low brush all resonated with the frequency of b movie and television murder scenarios.  In other words, the material contained its own narrative resonance.

This particular installation was the most challenging iteration of this work to date.  This was so for two reasons.  First, the rubbish in this dump had been in the bush for several months and was particularly difficult to handle.  The clothing and soft toys stank and the books and paper material were falling apart. Much of it was in a state of decomposition that prohibited handling and refused the imposition of formal order.  Second, these works are normally made in a gallery context, where the imposition of order on the inchoate material is more easily achieved against the blank ground of pristine white walls.  The bush around this work had its own sense of organic anarchy and order that denied so many of my attempts to integrate the installation via formal strategies or render it coherent through narrative connections.

The difficulty is always, how do I make this rubbish look like art and in this instance especially, I struggled with the fact that against a backdrop of the Australian bush, the material I was working with would always look like rubbish.  The work began to comment on the struggle to harmonise the man made universe with the natural universe, including the limits and failures implicit in this endeavour.  The installation became a primitive site of ritualised construction, already childish, demented, traumatised but also capable of joyful play.  By utilising these objects of everyday use and culture as the material of art, I find myself compelled to pay the kind of close, respectful attention that any artist must pay to the medium in which they work.   The understanding gleaned from such an examination and an endeavour to employ raises these objects from their obscurity as used, forgotten, discarded and habitualised objects into a realm in which they are made essentially to mean something, and something that only they are capable of meaning.

The Forest for the Trees

This exhibition at Branch 3d, a window gallery in Glebe in Sydney was made at the invitation of Branch 3d director Sarah Nolan.  I have been working with cans for well over a year, a practice that evolved out of a consideration of the 2d picture plane in photography which for me is more absolute than that of  painting because of the lack of material mark, and the weak relationship of the photograph to its support.  The can presented itself as a particular solution because it occurred to me that we 3 dimensionalise photographs all the time in the labeling of things.  The forest motif entered because at the time of the invitation I was photographing this feral pine plantation and really enjoying the democratic nature of these photographs.   I could photograph anything and it would turn out beautiful.  This seemed to me to be an appropriate marriage between the two projects.