This essay was originally commissioned for an art magazine that will remain nameless.  It was ultimately rejected, for reasons that were obscure and confusing to me.  I  shelved the essay for several years until recently tripped across it while thinking about an artwork I am currently making that relates to public artwork.  Giving it another read, I thought that this was indeed a good essay and the editor who rejected it probably didn’t know what they were on about.  So here it is.  Let me know if its crap.

I was recently invited to curate an exhibition of public art.  It was an intriguing offer, if only for the fact that I don’t particularly like public art.  In considering the proposal, I had to ask myself if I could put together a decent show in a medium I’m not fond of?  It was a good question, and so I accepted.

To be accurate, its not so much that I don’t like public art as that I am acutely ambivalent about it.  I avoid it at every opportunity.  In my efforts to recall a significant instance of considered engagement with the genre, all I could manage was an image of myself hurrying under the shadow of some hulking monolith, eyes averted as I attempted to evade the affect of its domination. 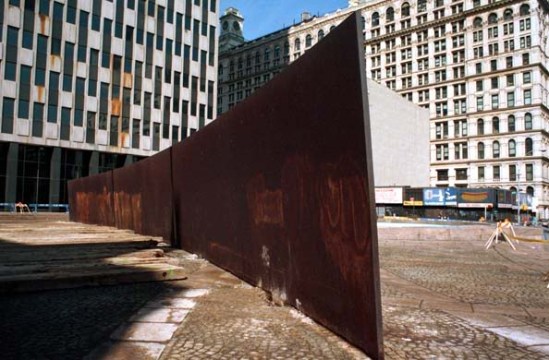 It is appropriate then that the first work I will address is one that I have never seen.  This is because it has been removed from its place of display due to public outcry.  Richard Serra’s Tilted Arc 1981, was a 120 ft long, 12 ft high slab of Cor-Ten steel that tilted precariously as it dissected Federal Plaza in Manhattan.  The sheer mass of this rusty wall leant above the viewer in a looming expression of the force of gravity, both sustaining it and implying the threat of its collapse.  The physical being of the material is made to confront the viewer through the threat it posed or implied to their body, compelling them into an awareness of the embodied nature of the experience of the work. In other words it functioned via intimidation.  Furthermore, you literally couldn’t avoid it.  It cut across the plaza, interrupting the openness of the public space and compelling its ‘audience’ to traipse around it in a gesture of imposed inconvenience.

For this reason, I can identify with those who argued for its removal.  While the physical scale, and material permanence of public art is often the source of its intimidation, it is also confronting in its subject position.  Public art is never the isolated statement of an artist, but is composited of those civic forces that must combine in order for a work of art to claim its place on the public stage.  Both the historical weight and the social body of any work of public art is confronting in its scale relative to the subject position of the individual who walks past it.  In this, the experience of public art is always the experience of one’s own relationship to power.  This is more immediately evident in the traditional statuary of historical figures, but persists even in the most benign of modern installations. 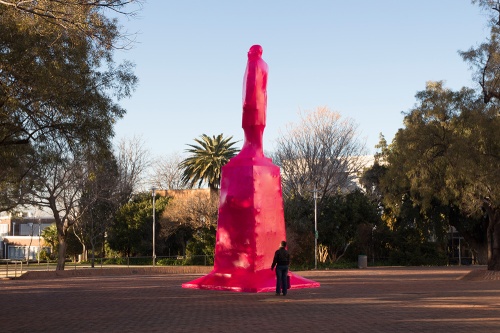 Contemporary artist Cigdem Aydemir exploited this dimension of public art in her work, Plastic Histories by shrink-wrapping in pink plastic the bronze statues of white male historical figures in the South African town of Bloemfontain.  These statues litter the regional city as remnants of its colonial past, depicting men who had participated in some of its darker moments.  Despite South Africa’s relatively recent political reversal, these monuments remain in place as residue of that history.  Cigdem’s work was a direct attempt to lift the veil of banality in which these statues subsist.  In doing so, she confronted their public with the history the statues were intended to proudly represent, but now hide from view as objects of repressed memory.  The demand of the contemporary artist that we face this history and the society it has produced is a confronting challenge, requiring of its audience the resolve to lift and keep our eyes upon it.

And yet, this does not relieve me of my ambivalence.  While I can identify with the office workers who rejected Stella’s Tilted Arc, I am also aware that opposition to it was reactionary in nature.  The removal of a work of public art is an expression of the same civic forces that resolve in its commissioning.  There is some truth in the argument in defense of Tilted Arc, that its detractors disliked the work because it challenged their conventional expectation of both art and public space. 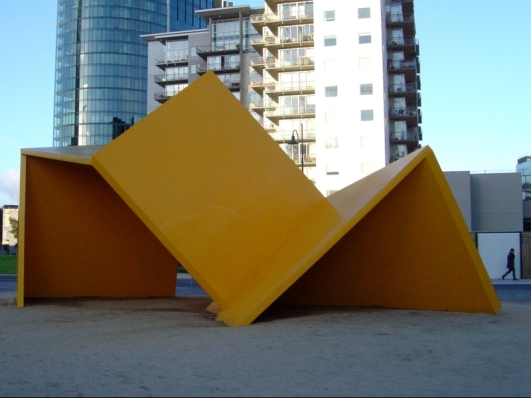 At almost the same time that Tilted Arc was being commissioned, another work of art was being removed from a public square in Melbourne’s CBD.  Ron Robertson Swann’s Vault had none of the arrogant provocation of Tilted Arc, though it was bright yellow, abstract and completely foreign to the taste and understanding of the local newspapers and council factions.  Even Queen Elizabeth, on opening the square, commented that it might have been done in a more pleasing color.  After a vitriolic campaign, it was removed to a park on the banks of the Yarra River.  Robertson-Swann, who had not intended to offend anyone, felt that had the sculpture been allowed to remain, it would have eventually achieved acceptance.  “If something new comes into the world then it takes a while for taste and sensibility to adjust”. [1] And if history is anything to go by, he was right.  It is now proudly displayed in front of ACCA, an art space, where it can be safely ignored like any other public artwork.

The queen’s comment was perhaps most acute, because it does make us ask whether art must forgo its capacity to challenge norms, to shock or make its viewer’s uncomfortable.  Does it need to be pleasing if we are to live with it in our public spaces?   This question is almost beside the point because aside from any particular challenge an artist does or does not intend, the nature of public art is challenging.  And perhaps this is the source of public art’s power to deflect human gaze: it occupies a space I believe or understand, on some level, to belong to me.  The presence of an object resulting from and thus expressing specific values, interests, and positions of influence within a space that belongs to everyone confronts us with a sense of our ownership through its violation.

The act of ignoring a work of public art is at once a defiant refusal to validate its function as art by withholding one’s participation as viewer and at the same time an abnegation of that highly ambivalent birthright, one’s share of ownership as a member of the public in public space.  One’s relationship to a public artwork contains the relationship to those structures of power that made the work possible and before it we feel something of our own subjection.  Though this might seem a pessimistic analysis, it has another side to it. This collision brings us into contact with our own investment in and responsibility for the society that surrounds that space – it confronts us with our civic self.  This is exactly what Cigdem Aydemir was attempting to aggravate, not to generate a consideration of art, but a consideration of the social and political context it occupies.

To return to the dilemma of the proposed exhibition of public art: as I was reflecting on the proposed exhibition, I happened to drive down the back street of my hometown of Kandos.  On the side of an industrial shed, in bright pink letters, the words “We just want to throw flowers at the world” proclaimed themselves in a gesture of absurd enthusiasm.  The work, by Genevieve Carroll, was a hangover from the past Cementa festival.  The exuberant good will of its statement, flashing like a bright smile from the grimy face of an industrial shed made me stop.  I was not intimidated by it, but caught by its cheerful absurdity.  The humility of its position, so far from public prominence that the work escaped the burden of self-importance that so much public art suffers from. It embellished instead a place of industry, buried on the back street of a small country town.  It’s strangely empty subject-position, ‘we’ includes me if I identify with it, but if not can imply a specific subject speaking in a joyful tone, a message of nonsense that is more the expression of an emotional tenor than any kind of direct statement.

I can sift through the qualities of the work, rationalizing my affection for it, but try as I like, I cannot dispel the troubling suspicion that I like it because it expresses specific values with which I identify.  In fact, as a co-director of the festival that brought this work into the town, I directly participate in those civic forces that made it possible. My perspective is far from universal, and it is all too likely that some of the locals might not like it at all.  For them, the work would be but an imposition of bizarre and alien values, interests and positions of influence that have coalesced to adorn a town they rightly felt belonged to them with an object they would have little context for understanding.

There is no moment at which the ambivalence of public art resolves itself into the unified expression of the public sphere it inhabits.  This is because the public of public space is always multiple, disparate and permeated by difference.  Despite any ideological presumption of unity it is always a site of at least implicit contestation.  Whether one defend, attack or ignore it, any response to public art is implicated in the contradiction between the unity presumed by the term ‘public’ and the viewer’s particular difference to others within it.  In other words, it uncomfortably presents us with our own specific place, our own subject position relative to other, often competing positions within the public space it inhabits.