A Hole For Hill End

A Hole For Hill End 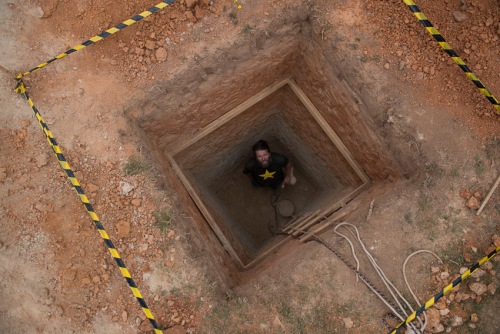 In November 2013 I spent a month in Hill End on an artist residency.  For the entire month, or for those days that I was actually able to be in Hill End, I dug a hole.  This is the story of that hole.

“Demonstration of Gravity” is a development of the photo series, “How come when I hurt you I don’t feel it?”.  It resulted from the photo shoot of the man holding the cow’s heart in the middle of the city, which took a long time and we did many different setups.  The model began to complain that the heart was getting heavy, which I thought was so beautiful.  It occurred to me while reviewing the series of shots taken that the work would function better as a video.  The idea was that the video would last for as long as I could physically hold the brick.  In the end the video went for 40 minutes because that was how long the tape was.  Again, by placing myself in the existent context of the crowded street as a contrived disruption, the reality of the context would reveal itself. This time though, you could watch it emerge.  The difference in intensity between the subject and the ground became very important as the viewer’s gaze and interest shifted between the painful monotony of my ordeal and the tumultuous diversity of the city revealing itself as it quickly passed.  I would like to further develop this project by staging it in many different locations and showing the results in a single show, hopefully allowing for a comparison between the different experiences.

This was a work made for a group show “Rocking The Boat” at At The Vanishing Point Gallery in early 2010.  The theme addressed the political badminton that boat people had become in both the press and the political sphere.

The video, called “Stay Awhile” is 30 minutes of duration of a locked shot, unedited, through a chain link fence of the industrial farm buildings of a battery chicken farm.  It was displayed on an old television on a coffee table with two bean bags in front of it.  The artist statement read “This work represents just 30 minutes of your time”.  The idea was that gallery goers would not spend 30 minutes enduring the same time we subject detainees to for indefinite lengths.